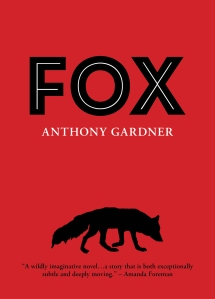 When I started this website, it was with the intention of promoting other people’s books rather than my own. But now that a novel called Fox by Anthony Gardner has been published by Ardleevan Press (a beautiful illustrated hardback costing £17.99), it seems perverse not to say anything about it. Visiting http://www.ardleevanpress.com will give you a sense of it, but in the meantime here is the first review, by Simon Humphreys in the Mail on Sunday – and a wonderful one it is.

‘Christophe Hardy, a biochemist working in China, uncovers a plot to sell an invasive Chinese surveillance system, called the Mulberry Tree, to the British Government. Meanwhile, in Europe, fear of fox flu has led to a resurgence of foxhunting.

‘Set in the very near future, Anthony Gardner’s second novel is a gentle, engaging and topical satire on our surveillance society and on British subservience to the Oriental superpower. It involves many shady goings-on, chases and escapes, and an exciting denouement in the Northumbrian countryside. Gardner is a natural storyteller who writes with great skill, nuance and wry humour. Highly recommended.’